Several smartphone brands have confirmed to launch devices with the freshly announced Snapdragon 8 Gen 1 flagship chip, and vivo sub-brand iQOO is one of them. The company hasn’t divulged anything about its Snapdragon 8 Gen 1-powered flagship yet, but a new report claims the smartphone could be a part of the iQOO 9 series, which will launch in India by late January or early February next year.

The iQOO 9 series is expected to consist of vanilla and Pro/Legend models, and the source claims at least one of them will support 120W charging. 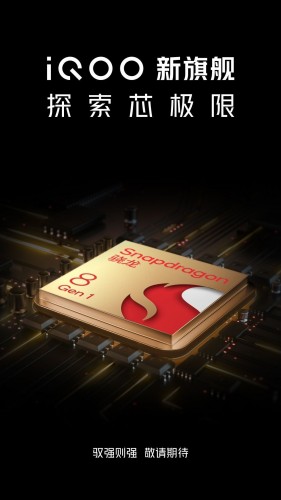 Multiple reports claimed that iQOO would launch the iQOO 8 series in India this year, but our reliable sources always refuted those and said the company had no plans to bring the iQOO 8 lineup to the Asian country, which was unveiled in China in August.

Circling back to the iQOO 9 series, it’s unclear if the lineup will go official in India first or the company unveil it in China before bringing it to the international markets. The iQOO 7 series was announced in China in January and began the global rollout in April, starting with India. And if iQOO decides to adopt a similar strategy this time, you can expect the iQOO 9 to launch in China this month or by early January.