We’re just mere days away from Realme’s flagship GT 2 series being announced and the multitude of leaks and teasers have us pretty confident with what’s coming up. A new official post on Realme’s Weibo page is detailing the GT 2 series cooling system. Realme is touting an industry-leading heat dissipation area of 36,761mm² with a supersized vapor chamber (VC) that has can keep up the phones’ thermals in check at all times even during heavy loads. 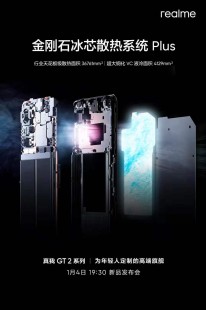 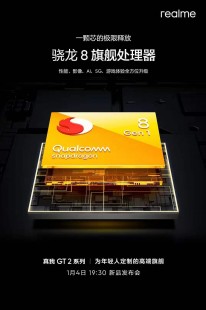 A separate teaser poster revealed Realme is also bringing a new gaming and performance mode for its upcoming flagships dubbed GT mode 3.0. It will help deliver maximum GPU performance. Realme also went ahead and confirmed the GT 2 series will be powered by the flagship Snapdragon 8 Gen 1 chipset which is not a big surprise. We’re expecting three GT 2 phones with a vanilla GT 2, a Master Edition model and a camera performance variant.