Besides several affordable tablets, TCL also unveiled a Snapdragon-powered Windows 11 laptop for students. And since smart glasses are all the rage now, TCL presented a new and improved Nxtwear model and a concept for XR glasses. Another concept showed what a foldable TCL phone might look like.

This laptop is based on the older Snapdragon 7c chipset (8 nm), instead of the new Gen 3 chip, but this is meant to be an affordable laptop for school – it will launch in the April-June quarter in select regions for $350.

Anyway, the chipset is paired with 4 GB of RAM and 128 GB of built-in storage. There is a full-size SD card slot if you need more storage – it won’t be fast, but this is more of a Chromebook alternative than a gaming laptop.

One advantage it has over most laptops is that the chipset has always-on LTE connectivity (Cat. 4) with 4G fallback, so if you put a SIM card in it you will have Internet access anywhere you go. There is also Wi-Fi 5 (ac, 2×2 MIMO) for local connections, plus Bluetooth 5.1 for audio (though there is a standard 3.5 mm jack as well).

In terms of portability, the laptop measures 14 mm (0.55”) thick and weighs 1.3 kg (2.87 lbs). TCL says it is the thinnest in its price range. The body does use quite a bit of plastic, though it has a metal frame to give it more rigidity. It is painted in a slate gray color that TCL has dubbed “Skywriting”. 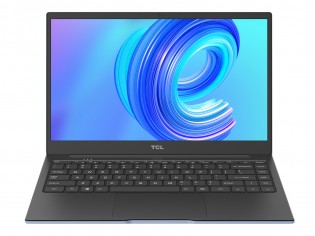 The battery isn’t huge at 40 WHr, but the efficient chipset means that the laptop has an endurance time of 10-12 hours. Getting that out of a cheap x86 laptop is a tall order. Anyway, another nice feature is that the laptop uses USB-C Power Delivery for charging (25W), meaning you can use your phone’s charger (that’s handy when traveling, otherwise the laptop comes with its own charger to use at home).

There are two USB- ports, actually, both support charging, but one also offers DisplayPort, so you can hook up an external monitor. There is also a regular USB-A for your older accessories.

Again, this is just a concept device and even the name doesn’t seem to be nailed down. The prototype we got to handle called itself “TCL Flex V”. This is still a work in progress with the end goal of producing an affordable foldable phone – TCL is aiming for $600-700 market price, well below the $1,000 Samsung Galaxy Z Flip3. 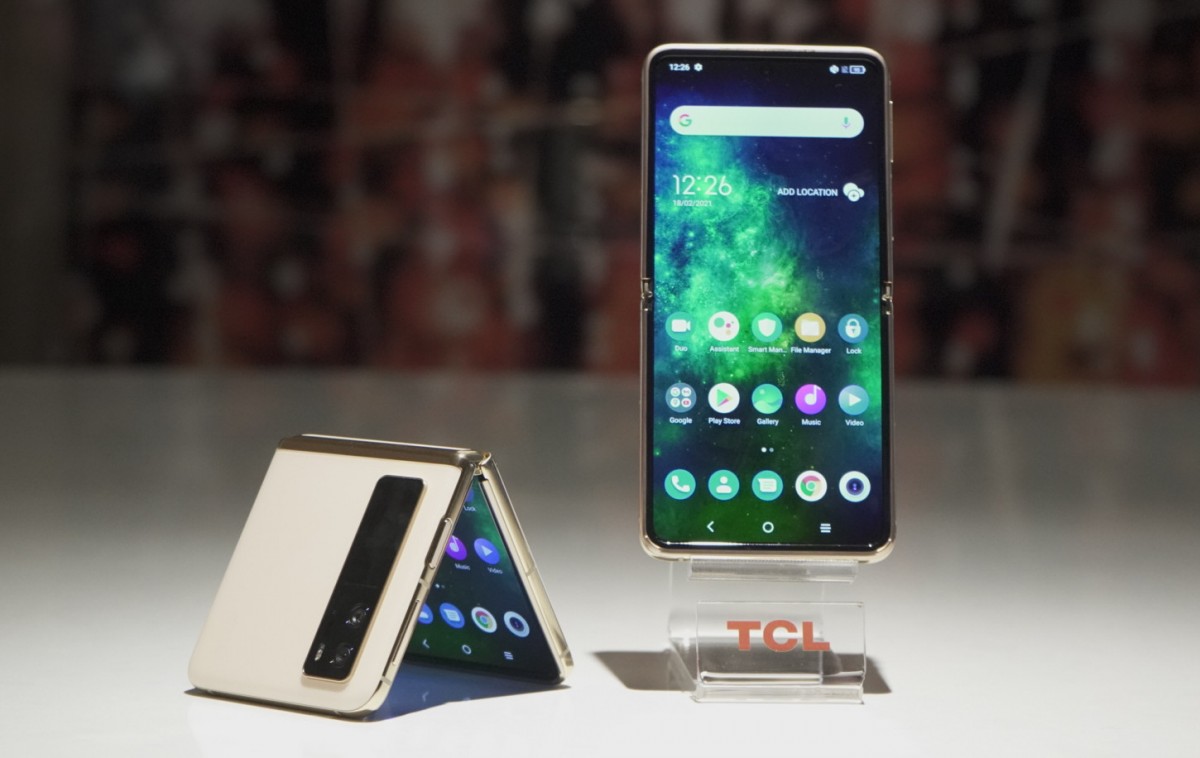 It is a clamshell flip like the Samsung phone, however, the hinge has a smaller gap when the phone is closed and it spreads out the crease, making it shallower and less noticeable. The aspect ratio isn’t as tall as the Z Flip (21:9 vs. 22:9). As for the external display, it is small and is used mostly for notifications, though you can use it as a viewfinder to snap a selfie. 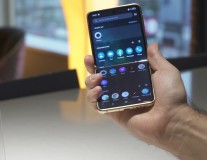 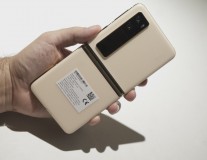 TCL’s flip phone concept has a 1,080 x 2,400 px inner display and a smaller secondary display outside

The prototype device is powered by the Snapdragon 765G and a 3,545 mAh battery. There is a 44 MP camera on the front and a 48+16 MP duo on the back. Note that the hardware for the future retail model is up in the air. 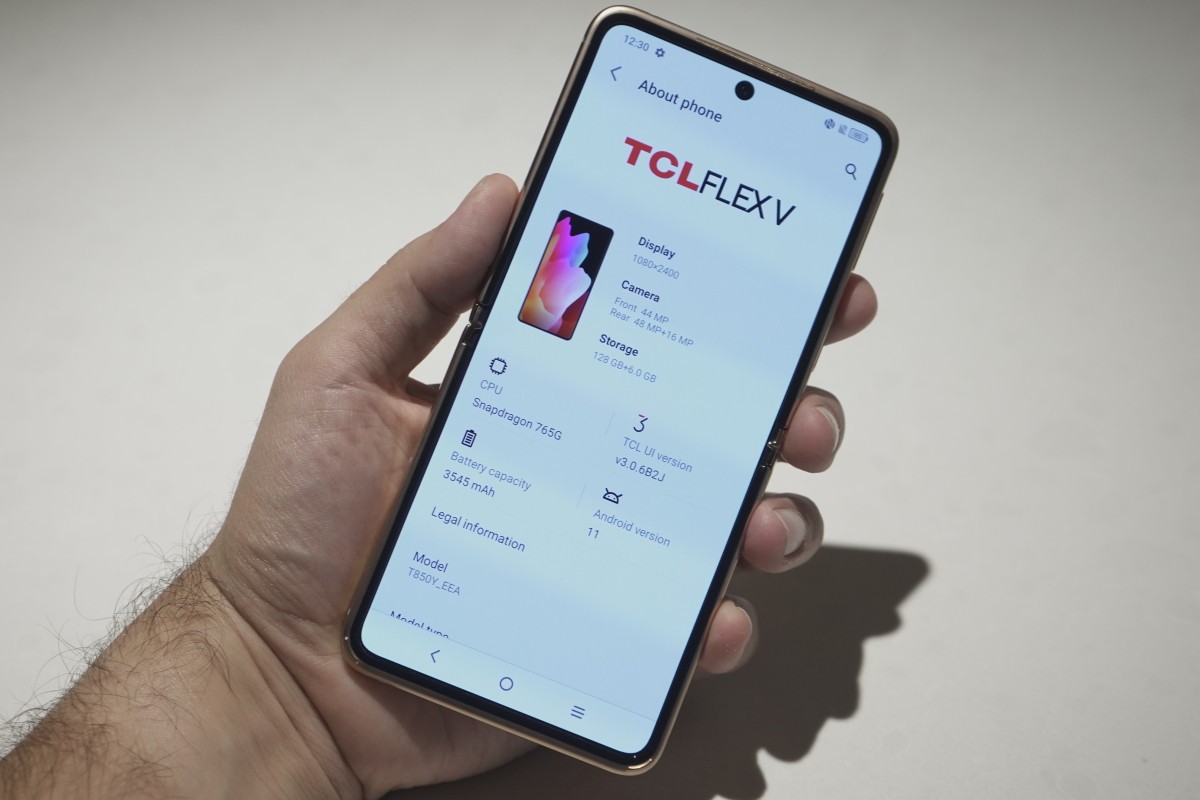 The company worked to improve the Nxtwear G and the “Air” name is no coincidence – making the glasses lighter was a major focus. The new model weighs 30% less and tips the scales at just 75g, making them more comfortable to wear over extended periods.

Whether you’re on a long flight or at home looking to play a game, the TCL Nxtwear Air will create the equivalent of a 140” display viewed at 4m distance (13 ft). The field of view of the virtual display is 47º. This is made possible by a pair of microOLED displays with 1080p resolution. That is enough for 47 pixels per degree. The displays run at 60 Hz and support 3D imagery. Also, the glasses come with two exchangeable front lenses so you can customize them to match your outfit. And you don’t need to bring headphones as the glasses have two built-in speakers (although you probably want to use headphones for more privacy and to not bother other passengers).

Like previous Nxtwear glasses, the Air are platform agnostic – you just plug them into a device that supports DisplayPort over USB-C and you’re good to go. This means you are not locked into a particular platform (like the Oculus headsets), you won’t have to deal with outdated software or even aging batteries (the glasses are powered by the USB-C cable). You can use them as a private, portable monitor for work, a large display for streaming video or (with the appropriate Bluetooth controller) for gaming. The glasses have an accelerometer and a gyroscope for 3 degrees of freedom, if the connected device can use that data to create more immersive experience.

TCL also unveiled a concept device, the Leiniao AR glasses. These are meant to work more as a heads-up display, showing relevant fitness data while exercising, a weather forecast and so on. We only got to try a prototype, so the full potential of the glasses is still to be revealed.